Going out on a limb here, but…

…not increasing – and definitely not doubling, as so-called experts and media predict.

Measuring from March 24 (numbers started spiking), using every-other-day numbers and taking into account testing has increased disproportionately, either our healthcare system is stepping up dramatically, contagion/lethality is being damped by the mitigating policies Trump’s so far invoked, or this whole thing is and was being vastly over hyped.

If numbers continue this trend over the next 6-day period, Pres Trump might call a halt to the economy-destroying policies, and use pinpoint targeting rather than mass action.

They ranted ‘racist xenophobe’ when he invoked a China travel curtailment and now they rant ‘too little, too late’ as the Wuhan flu picks up steam throughout the Nation.

Pres. Trump – in their eyes – should never be allowed to be cast in a positive light.

So, now, the Pelosi Impeachment Machine scales up their next narrative, claiming his ‘failure to act quickly’ puts Wuhan deaths on the President, ignoring their own actions.

Remember? As reported by the Washington Times: “FLASHBACK Feb. 24: Pelosi Stands In San Francisco’s Chinatown And Urges People To Come Out”

City and state leadership are responsible for the wellbeing of their communities, not the federal government…by definition, each locale presents varying needs of its residents.

The federal gov’t can provide guidelines and assistance, but local leaders must take the fore in their diverse locations…blaming Trump is all about dodging their own fails.

Media won’t call them out on those failures…but BlueCollar will.

When our Nation needs crucial solidarity…they’re all about divisiveness.

What else describes that fact, with deceptions like this? “CBS Airs Video From ER in Italian Hospital While Cuomo Makes Emotional Appeal for Ventilators in NYC”

(Italy was at the breaking point of hospital demands when that footage was taken.)

Running deceptive footage of a foreign ‘breaking-point’ moment as representative in NY does nothing but feed the raw panic and hysteria that media uses to hype it’s agenda.

But that’s what they do. Left-wing politicians, media, activists…all of them.

If it weren’t for deceit, they’d have no message.

As reported by the Center for Disease Control: “…so far this season there have been at least 39 million flu illnesses, 400,000 hospitalizations and 24,000 deaths from flu.”

Those were the ‘seasonal’ flu cases.

How does that make any sense at all?

On the one hand, they’re releasing criminals from prison because ‘Wuhan flu’ but, on the other hand, they’re trying to close gun stores by declaring them ‘nonessential’?

What do those things have to do with fighting the economic effects of this Wuhan-flu?

Here is what @SenSchumer  and @SpeakerPelosi are blocking:

Democrats honestly think their rank-&-file supporters hit hard by the Wuhan-flu will be okay with financial relief being held up to satisfy the Pelosi/Schumer slush-fund efforts?

Remember this in November – they are NOT OUR FRIENDS…

…but they’ll take our money to throw around among their crowd.

“Is This a Pandemic Or a DemPanic?” 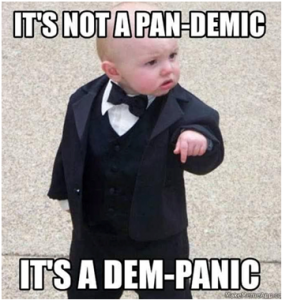 “WHERE ARE WE NOW?

All praise to the brilliant graphic artist (above) who captured so perfectly what we are witnessing today––the last-gasp efforts of:

These are just a few of the forces who have been working overtime for the past four years to sabotage, undermine, and ultimately destroy both candidate and then President Trump, the man who single-handedly exposed:

And yet, with all their impressive advanced college degrees, fancy credentials, exalted titles, tenure-for-life government jobs, social-media collaboration with leftist Google, YouTube, Facebook, Twitter, Instagram, et al, and the flagrant abuse-of-power they’ve gotten away with––but not for long!––such as illegal FISA warrants, lying witnesses, shadow-banning, rigging elections, the list goes on…they still could not bring down THE. SMARTEST. GUY. IN. THE. ROOM.

TEARING THEIR HAIR OUT

Now, almost eight months from a presidential election, all of these forces are desperate, anguished, just-about suicidal with frustration. What can we do, they are asking themselves, to stop President Trump from winning a second term and then crushing for all time the remaining malignant remnants of the leftist agenda?

While none of them are smart enough to have created the corona virus threat, they secretly celebrated the fact that this crisis would prevent the president from conducting his two or three rallies a week around the country, where upwards of 50,000-75,000 people line up for days on end to applaud and support their president.

Well, they got their wish. Now he is on TV every single day, showing the entire country (and world) what genuinely strong and effective leadership is all about––which is why his approval ratings are skyrocketing!

Undaunted, the frantic left is spending untold billions,not to help the deserving people affected adversely by the corona virus…“

Over half of U.S. reported cases are in New York state, according to this source.

Want more proof? “House Speaker Nancy Pelosi (D., Calif.) worked to scupper the phase-three coronavirus relief package on Sunday after Majority Whip James Clyburn (D., S.C.) told caucus members last week that the bill was “a tremendous opportunity to restructure things to fit our vision.” Clyburn’s comments came on a Thursday call featuring more than 200 House Democrats, during which caucus members laid out a list of provisions they wanted to be included in the Senate’s trillion-dollar package.”

Apparently the Democrats are more intent on pushing their ideological agenda than doing anything to help the American economy during this healthcare emergency.

Is everyone okay with that?

See, the House Democrats can do whatever they want, without accountability.

Or, so they think.

Two facts that can’t be dismissed…

Call it conspiracy-theory if you will, but…

Suddenly (?) we’re hit with a Chinese virus with its origins and initial infection rate there hidden from the world until too late to stop a global spread – and just so happens to…

…several months before a National election.

(Where the FakeNews media and Democrats are concerned, we’re seeing dots.)

Either way, American resolve will triumph – the only question…how soon?

The cruise ship Diamond Princess, with its earlier tribulations, may provide a clue.

Shouldn’t ANY presidential candidate be required to take that test before an election?