The CDC also reports that there were 33,687 motor vehicle-related deaths in 2010.

Since that’s over 3x the number of gun-related homicides, we thought it wise – in an abundance of caution – to provide a map of registered motor-vehicle owners, with the locations of these dangerous ‘vehicles of death’ highlighted in blue: 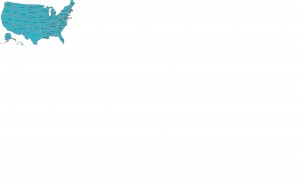 Let’s break this down so even Mongo would have understood…

The ‘fiscal cliff’ that media heavies and dishonest politicians are fretting over in high drama can be described in one sentence. It is a combination of 1) the tax hikes headed our way on Tuesday January 1st, and 2) the automatic $110 billion in spending cuts to be imposed.

Only in Washington DC can a crisis be created from nothing, since…a) pro-growth legislation that would solve the tax-rate problem has been hidden away in the Democrat-controlled Senate; and b) that $110 billion in spending cuts is merely 3.1% of the Democrats’ planned fy2013 expenditures – spending that, judging by 2012 , will be $1 trillion more than what they’ll generate in revenue.

(Did you notice a common thread in the above? Hint: the answer starts with a “D”.)

Our , sorry, leaders in Washington – aided by the media – offer up for your viewing pleasure this ‘Theater of the Absurd’, in the hope that you’ll buy tickets to a show where

1) they created a crisis by NOT doing their job, and

2) wring their hands and wail over cutting expenditures…of money they WON’T HAVE.

The South, staunchly Democrat for the next 100+ years, stubbornly fought politically, socially, economically, and legislatively to keep the Black-American population down.

And this 150-year anniversary on January 1st is marked by a reflection of where we are today. Despite skyrocketing unemployment and a demonstrably worsened household-income throughout the last 4 years, over 90% of the Black-American vote went to Democrats in this election cycle.

Ironic…the Republican Party was founded by anti-slavery proponents in 1854, and for 159 years have supported those principles that uplift all people – regardless of race, creed, or color.

And, for their reward…

So, if you want to reduce gun-related deaths by 61%, make suicide illegal.

When did NBC start speaking for the NRA, and BlueCollarPerspective?

Last Sunday, a ‘Meet the Press’ journalist managed to make the gun advocates’ case for them, inadvertent though it may have been. He also made the case for our earlier BlueCollar blogs on the Sandy Hook killings, and assault weapon silliness.

While trying to make the point that gun laws should be expanded to make high-capacity rifle magazines illegal, in high drama he waved just such an item under the nose of an NRA CEO. But in D.C., where that show was being taped, it IS illegal to possess such an item…and David Gregory could now be charged for having it on the show!

His unwitting ‘felony’ may be the gun advocates’ dream argument. Piling laws on top of laws with little effect isn’t the answer; it only adds to the confusion (ask NBC’s Gregory, if he’s convicted in the future for his ‘dramatic effect’). And let’s go one step further – is it necessary to convict someone of a crime, when the magazine was in his possession… but the rifle needed to complete the combo was not? And what about intent?

If Gregory is charged, BlueCollar is curious to see if their defense uses the argument posed in our Dec 18 blog, “What ISN’T an assault weapon..?” We posed the question based on one very simple fact – without the presence of intent or action to do harm, a firearm (or accessory item such as a high-capacity magazine), is an inanimate object.

Action defines the object…it takes an assailant to make an ‘assault weapon’.

A newspaper in White Plains New York published the names and addresses of licensed hand-gun owners in their area – complete with Google Maps for each address.

While not sure if it was meant as an intimidation tactic against gun owners, you can be sure of one thing…for the price of a newspaper, future criminals in those areas now know which houses to avoid, and which ones can’t be protected by their owners.

We wonder if that newspaper understands every criminal act in those areas – from this point on – now can be attributed to them, by any enterprising victim bent on litigation?

Gannett Company, owner of the newspaper, better be ‘lawyering up’…

When – sorry, exchanging ideas – with Liberals (or Democrats, if you will), it’s always a good idea to make the exchange short, fact-based, and effective.

We’ve added a Ripostes for Liberals page, which will be updated continually to give you the most decisive, thought provoking responses to Liberal thinking. Happy Hunting!

(And your suggestions are always welcome)

When was the last time a political party avoided proving another party’s legislation was bad policy? Especially when 40 examples might be available?

But what do you do when it’s good policy, but call it bad policy and refuse to discuss it?

That’s why the word “buried” in the first sentence is in bold type.

For those who would like detail proving Democrat culpability…

Mark C emails, suggesting links to relevant data would help flesh out information for those inclined to delve further into details…BCP will add that info when appropriate.

This link to the House Representatives ‘job tracker’ lists 40 pro-growth bills deliberately being stalled by Democrats in the Senate, so the crisis can be blamed on GOP…

If you know the Democrat-controlled Senate is stalling 40 Republican pro-growth, ‘fiscal-cliff-solution’ bills…yet insist on blaming Republicans for the looming fiscal crisis…

…you must be a Democrat!