“FBI says it has “grave concerns” over release of Russia memo”

Congressman Gowdy announcing his decision to move back into private sector’s legal practice may be a warning note for unethical deepstaters recently exposed in illegalities.

He was a ferocious prosecutor; we only hope what he’s seen in DC keeps him…busy.

Begs the question, no?

For a Party that leaks classified information so routinely, to suddenly not have within their capability a chance to leak the memo they’ve written, is a definition of ludicrous.

But, unlike the Democrat effort, the Republican memo has fact and evidence in support.

…it ain’t worth reading anyway.

Bonuses and raises are pouring into worker pockets…

Protecting our borders will ensure the safety and security of Americans…

Respecting the Nation’s Flag, and the military who serve means stand for the Anthem…

Americans are Dreamers too… 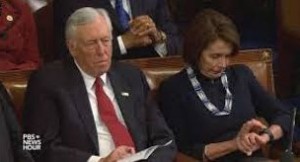 Yeah…bi-partisan hopes with these losers are a pipe-dream.

For all their bluster and dire accusations, Democrats are proven to be the Fat-Cat Party in the mix – nothing proves it more clearly than wage growth for the working class.

Obama-era fiscal policy plugged over a trillion dollars into the economy, but it went to unions and fat-cat corporations…who funneled it back with huge Democrat donations.

Democrats, for all their talk about being the workers’ Party, are anything but.

And the Republican corporate tax cuts, for all they’re demonized as enriching the 1%, are really part of the stimulus for unleashing worker wages, being witnessed now.

Since the GOP tax-cuts, not a week goes by without stories of large corporations giving out bonuses and wage increases…when did that happen during the Obama era?

When Democrats rule, wage growth is strictly a Top-Tier result.

We won’t even go into how the burgeoning stock market, on steroids over anticipated tax-cuts and its implementation, has dramatically improved 401Ks and pension plans.

The proof is in the numbers…and unlike certain politicians…numbers don’t lie.

Everything you need to know about how explosive this 4-page GOP memo summary of abuse within the FBI and Justice Department is explained by the lack of leaks to date.

When it hurts Republicans, the leaks NEVER stop.

And when they go completely bat-crap crazy trying to stop the transparency such a release will allow, you know the sky is gonna come crashing down on the Left.

The next few weeks promise to be fun.

Democrat James Clyburn is the latest politician condemning the President as Fascist,  but truth is, ‘fascism’ describes an authoritarian mindset which Obama demonstrated.

Clyburn is either tragically misinformed, or deliberately obtuse.

…you know – like Barack Obama did during his presidency.

Obama and his Democrat cohort took over 16% of the economy with their Obamacare death-grip, and Obama’s Justice Department used the FBI and CIA against citizens.

So, when talking ‘fascism’ – you need look no further than the Democrat Party.

You gotta love it…

…the Democrats are in an hysteria-infused panic, now that their opposition dirt-dossier is being revealed as the driving force behind abusive surveillance acts by Obama’s FBI.

So, to sum up, their unsubstantiated dirt-dossier is to be taken seriously absent any proof, but showing how it was used to illegally surveille a political opponent is wrong?

Put simply, when a special counsel can’t show any Trump-Russia collusion crime after over a year of investigation by FBI and counsel efforts, it’s time to put up, or shut down.

And, by ‘specific’ we mean just what Mr. McCarthy calls for…

“it would be wrong for Mueller to seek to interview the president of the United States unless he can first show cause that (1) a serious crime implicating the president has been committed and (2) the president is possessed of testimony that is both essential to proving the crime and unobtainable by alternative means.” (emphasis added)

Republican, Democrat, or Independent, if you want to know whys and wherefores of the manner an honest, objective law enforcement should function, read McCarthy’s article.

Not only that, he also lays out in brief detail how and why the Justice Department’s Deputy AG Rosenstein should be doing his job – and how he’s failing that task…

Fear of attacking any Obama policy actions while he was in office was driven by the fact that he was the ‘first Black-American president’ and no one wanted to be painted racist.

But weaponizing the FBI and CIA for crass political purpose is a huge scandal, and will even the ‘first black-American president’ be able to elude the inevitable indictments?

Just to be clear – the FBI, CIA, and Justice Department answered to…Barack Obama.

No one in their right mind would believe this level of chicanery wasn’t at his direction.